What Is Metaphysics, What Is Philosophy and Other Writings By: Martin Heidegger [Audiobook] 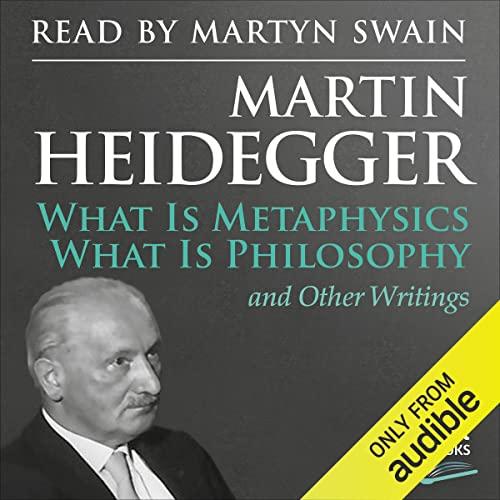 This recording contains four important and related works by Heidegger: ‘What Is Philosophy’, ‘What Is Metaphysics’, ‘On the Essence of Truth’ and ‘The Question of Being’.

It starts with ‘What Is Philosophy’, which originated as a lecture given in Normandy in 1955, and was first published a year later. The translators acknowledge that ‘What Is Metaphysics’ is often regarded as a particularly key work, they feel that ‘a better preliminary understanding’ of Heidegger can be obtained from ‘What is Philosophy’. They write: Heidegger ‘is concerned with the fact that philosophy has lost its receptivity to the Being of being/entity. In other words, philosophy no longer seeks the groundless ground of Being which allows us to ask meaningful questions about being/entity, or its appearances. Heidegger uses Being as the ‘inner light’, that illumination through which we become conscious of our meaning or of our existence and of existence itself. The light allows us to know that we are ‘beings’.

The second work on this recording, then, is the more famous essay ‘What Is Metaphysics’, published in 1929, to which some 14 years later he added a ‘Postscript’. Both texts are presented here. Heidegger states that rather than enter into a discussion about metaphysics, he sets out to ‘discuss a definite metaphysical question…. Our project begins with the presentation of a metaphysical question, then goes on to its development and ends with its answer’.

In ‘On the Essence of Truth’, (1930) Heidegger explains: ‘The question as to the nature of truth is not concerned with whether truth is the truth of practical experience or of economic calculation…or the truth of scientific research or art…or religious belief…but what is ‘the mark of “truth” of every kind.’

The final essay on this recording is ‘The Question of Being’ (1955). Its original title, (in a literal translation from German), was ‘Concerning the Line’, and was included in a publication honouring the 60th birthday of the philosopher Ernst Jünger. Heidegger wrote it in the form of a letter in response to an earlier treatise Jünger dedicated to Heidegger called ‘Across the Line’. Heidegger questions Jünger’s notion of ‘zero line’, of nihilism: the essence of nihilism stems from a discussion of Being as being/entity.

Translations by Jean T. Wilde and William Kluback (‘What Is Philosophy’ and ‘The Question of Being’) and R. F. C. Hull (‘What Is Metaphysics’ and ‘On the Essence of Truth’).

Penetration: The Question Of Extraterrestrial And Human…

The Restoration of Man: C S Lewis and the Continuing Case…

What We Owe the Future: A Million-Year View By: William…

How to Be Authentic: Simone de Beauvoir and the Quest for…

The Other Side of Nothing: The Zen Ethics of Time, Space,…

Gateau: The Surprising Simplicity of French Cakes By: Aleksandra…