Underworld: The Mysterious Origins of Civilization By: Graham Hancock 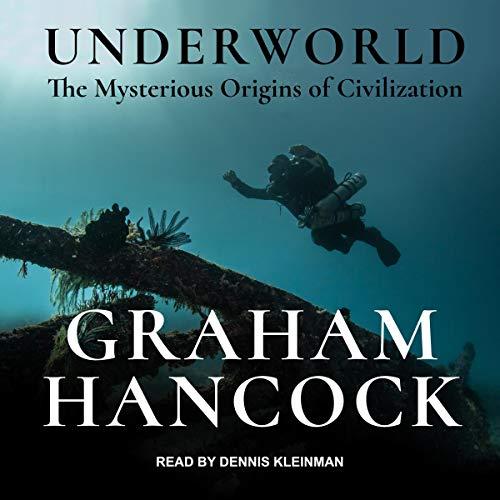 From Graham Hancock, best-selling author of Fingerprints of the Gods, comes a mesmerizing book that takes us on a captivating underwater voyage to find the ruins of a lost civilization that’s been hidden for thousands of years beneath the world’s oceans.

While Graham Hancock is no stranger to stirring up heated controversy among scientific experts, his books and television documentaries have intrigued millions of people around the world and influenced many to rethink their views about the origins of human civilization. Now he returns with an explosive new work of archaeological detection. In Underworld, Hancock continues his remarkable quest underwater, where, according to almost a thousand ancient myths from every part of the globe, the ruins of a lost civilization, obliterated in a universal flood, are to be found.

Guided by cutting-edge science and the latest archaeological scholarship, Hancock begins his mission to discover the truth about these myths and examines the mystery at the end of the last Ice Age. As the glaciers melted between 17,000 and 7,000 years ago, sea levels rose and more than 15 million square miles of habitable land were submerged underwater, resulting in a radical change to the Earth’s shape and the conditions in which people could live. Using the latest computer techniques to map the world’s changing coastlines, Hancock finds astonishing correspondences with the ancient flood myths.

Filled with thrilling accounts of his own participation in dives off the coast of Japan, as well as in the Mediterranean, the Atlantic, and the Arabian Sea, we watch as Hancock discovers underwater ruins exactly where the myths say they should be-sunken kingdoms that archaeologists never thought existed. Fans of Hancock’s previous adventures will find themselves immersed in Underworld, a provocative book that provides both compelling hard evidence for a fascinating, forgotten episode in human history, and a completely new explanation for the origins of civilization as we know it.

Living Untethered: Beyond the Human Predicament By: Michael…

The Rise of English: Global Politics and the Power of…

The Illusionist Brain: The Neuroscience of Magic By: Jordi…

Summary of Labor Econ Versus the World: Essays on the…

Inside Broadmoor: Up Close and Personal with Britain’s…

How to Listen: Discover the Hidden Key to Better…

The Genesis Machine: Our Quest to Rewrite Life in the Age of…

The Fight for Privacy: Protecting Dignity, Identity and Love…