The Art of the Stone Age: Forty Thousand Years of Rock Art By: Hans-Georg Bandi 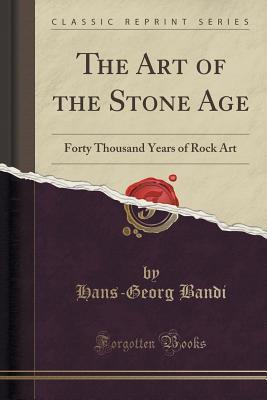 Excerpt from The Art of the Stone Age: Forty Thousand Years of Rock Art

The birth of ‘advanced hunter culture’ must be sought in the last phases of the Ice Age, some years ago. Its demise can be observed in our own day, for there are still some peoples the Bushmen in South Africa, for example who are the last surviving practitioners of this once wide spread mode of economic life.

With peoples in this stage of development their entire existence in all aspects economic, social and spiritual is dominated by hunting. Everything is focussed upon the quest for game. All man’s thoughts and emotions are centred. Upon the constant conﬂict, practical and spiritual, with animals. This leads to a conception of the relationship between man and beast as a very real unity of substance, that is to say, to a belief in the unity of the entire animal world and the interchangeability of human and animal forms of existence. 1 These far-reaching problems cannot be gone into in detail here, but it may be pointed out that in many places ‘advanced hunters’ had to their credit varied artistic achievements, a genuine ‘ritual art’ which gives us most interesting in sights into the spiritual world in which these peoples lived.

We are concerned here with rock pictures, although the art of the ‘advanced hunters’ also comprises minor arts such as sculpture, engraved or painted decoration on movable objects, and much else besides. But one should not jump to the conclusion that all the rock engravings and paintings scattered over the entire globe are the work of ‘advanced hunt ers’. Rock pictures can also be produced by peoples in other stages of cultural development, although in such cases one must frequently reckon with the possibility that inﬂuences or traditions derived from hunters play a certain role. Naturalistic works are found most particularly in the southern parts of the region inhabited by ‘advanced hunters’. This fact will be illustrated in the various sections of the present volume. These sections do not amount to an exhaustive survey. Such a survey would have to comprise much more than the few glimpses given here of Franco Cantabrian and Eastern Spanish art in south-western Europe, of the rockpaintings in North Africa (a region where pictures by hunters are interspersed with others by cattle-raisers, which are also treated here), of the rock art of South Africa, and finally that of Australia. Some other centres of rock pictures, principally in Africa and the Near East, have had to be omitted. Nor has it been possible to mention the rock art of the Arctic, although it may be pointed out here that in Scandinavia, in addition to engravings executed by agriculturists of the Bronze Age, there is also a very impressive widely diffused group of works by Stone Age hunters and fishermen. Other evidence of Arctic art is to be found in Karelia, Western Siberia and Central Asia. Finally, no attention has been paid in these pages to rock art in the western hemisphere, which also belongs in part to hunter culture. Despite these limitations this volume will perhaps help to show that the ‘ritual art’ works of the ‘advanced hunters’, some of which date back to the Ice Age and some to more recent periods, are as impressive and beautiful as they are diversified and informative. The fact that the various regions of rock art are dealt with independently by different authors, and that each is alone responsible for the opinions expressed, shows how varied the approach to these problems can be. While some authors have kept rather to the traditional method of interpretation others have attempted to strike out along new paths. But all endeavour to introduce the reader to a subject which, owing to the magnificence of many of the works discussed, can also give something to those who are not so familiar with the mysterious world in which the minds of these hunter peoples moved.