Plagues and Their Aftermath: How Societies Recover from Pandemics By: Brian Michael Jenkins [Audiobook] 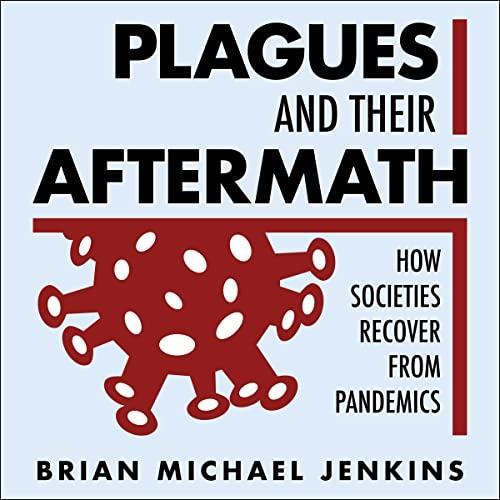 From a plague in Athens during the Peloponnesian War in 430 BCE, to another in 540 that wiped out half the population of the Roman empire, down through the Black Death in the Middle Ages and on through the 1918 flu epidemic (which killed between 50 and 100 million people) and this century’s deadly SARS outbreak, plagues have been a much more relentless fact of life than many realize.

The legacy of epidemics, Brian Michael Jenkins observes, is not only one of lives lost but of devastated economies and social disorder, all of which have severe political repercussions.

Thus, each chapter of Plagues and Their Aftermath draws on those historical precursors to focus on one particular aspect of their aftermath: What happens to political systems? What happens in the area of crime and terrorism? Do wars happen? What are the effects on cultures? What was the impact of widespread fear and public hysteria, of increased suspicion and scapegoating, of the spread of rumors and conspiracy theories?

Jenkins’s sobering analysis is riveting and thought-provoking listening for general listeners and specialists alike, and throws welcome light into what many fear is a dark future.

Duped: Why Innocent People Confess*and Why We Believe Their…

Everything Is Washable and Other Life Lessons By: Sali…

The Rise and Decline of Nations: Economic Growth,…

Wastelands: The True Story of Farm Country on Trial By:…