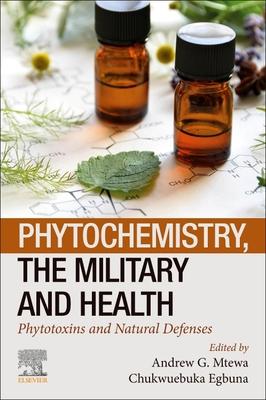 Phytochemistry, the Military and Health: Phytotoxins and Natural Defenses comes as a response to the gap that there has for so long existed between phytochemistry and survival of both service personnel and civilian communities during and after conflicts. Armed conflicts cause a lot of devastation to communities and should be avoided as much as it can be possible. The devastation is usually evident in service provisions such as Health, Education, Water, and Food among many others. Both service personnel and civilians are affected to various degrees. Facilities usually end up being physically destroyed, with no essential supplies and/or having dysfunctional systems. Going with untreated wounds, communicable and non-communicable diseases for weeks with no medical interventions due to the conflicts, disease burdens heavily weigh down on communities as well as security personnel. To make the situation even more complicated, masses of people are forced to migrate for safety and security reasons, likely going with diseases along wherever they go. In such instances, phytochemicals become handy in providing solutions from first aid, basic analgesia, antimicrobials, and the general improvement of health.

Phytochemicals are known to play a major role in the day to day management of diseases and health. There has been much research into their effectiveness as community medicines and as alternatives to conventional drugs. However, the role that phytochemicals play in the military, counterterrorism, and security has been overlooked. Phytochemistry, the Military and Health: Phytotoxins and Natural Defenses discusses the roles that phytochemicals play as friends and foes in the military, including insights aimed to help develop antidotes against phytochemicals and other chemical agents used maliciously as weapons. Filling a gap between drug discovery, security, and emergency medicine, this book describes which plants can be categorized for protection and controls, which can be helpful in times of conflicts and soon after conflicts, in military operations, and those that can be used as deterrents and as emergency medicines. Carefully designed to show the contribution that phytochemicals play in safety and security, this book is useful for researchers, regulators and anyone interested in plant chemistry.

Healing Back Pain: The Mind-Body Connection By: John E Sarno

The Song of Our Scars By: Haider Warraich

Chiropractic: Not All That It’s Cracked Up to Be By:…

Stay Off My Operating Table: A Heart Surgeon’s…

At the Edge of Mysteries: The Discovery of the Immune System…