Doctor Who and the Art of Adaptation: Fifty Years of Storytelling By: Marcus K Harmes 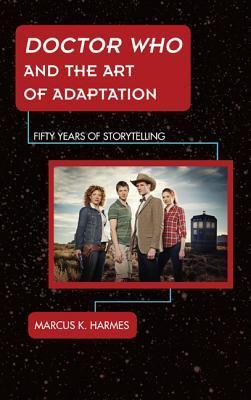 Although it started as a British television show with a small but devoted fan base, Doctor Who has grown in popularity and now appeals to audiences around the world. In the fifty-year history of the program, Doctor Who’s producers and scriptwriters have drawn on a dizzying array of literary sources and inspirations. Elements from Homer, classic literature, gothic horror, swashbucklers, Jacobean revenge tragedies, Orwellian dystopias, Westerns, and the novels of Agatha Christie and Evelyn Waugh have all been woven into the fabric of the series. One famous storyline from the mid-1970s was rooted in the Victoriana of authors like H. Rider Haggard and Arthur Conan Doyle, and another was a virtual remake of Anthony Hope’s The Prisoner of Zenda-with robots! In Doctor Who and the Art of Adaptation: Fifty Years of Storytelling, Marcus Harmes looks at the show’s frequent exploration of other sources to create memorable episodes. Harmes observes that adaptation in Doctor Who is not just a matter of transferring literary works to the screen, but of bringing a diversity of texts into dialogue with the established mythology of the series as well as with longstanding science fiction tropes. In this process, original stories are not just resituated, but transformed into new works. Harmes considers what this approach reveals about adaptation, television production, the art of storytelling, and the long-term success and cultural resonance enjoyed by Doctor Who. Doctor Who and the Art of Adaptation will be of interest to students of literature and television alike, and to scholars interested in adaptation studies. It will also appeal to fans of the series interested in tracing the deep cultural roots of television’s longest-running and most literate science-fiction adventure.

Download Doctor Who and the Art of Adaptation: Fifty Years of Storytelling By: Marcus K Harmes ( Size: 3.58 MiB ) :

A Power Stronger Than Itself: The AACM and American…

Land: Photographs That Make You Think By: Henry Carroll

Animals: Photographs That Make You Think By: Henry Carroll

Humans: Photographs That Make You Think By: Henry Carroll

Airbrush Step by Step I64 By: Newart Media

Castlevania: The Art of the Animated Series By: Frederator…

Fire Walk With Me: Your Laura Disappeared By: Scott Ryan